From TYTE JEFF’s “Lutheran Teens” LP, out on January 20th, 2017. This video was conceived and directed by Paul Danhauser.

Our debut full-length “Lutheran Teens” is out now!

You can find it on The Internet thusly:

ALSO THOUGH: Limited edition of 100 copies on white vinyl! Available at select Twin Cities record stores or at the Album Release Show at the 7th Street Entry on Saturday January 21st, 2017 or by visiting this the SHOP page on this webbed site.

LUTHERAN TEENS is an album about measuring your present self against the impossibly lofty standards you set as a kid. It’s about what happens when real life gets in the way of your unrealistic dreams. It’s about continuing to create art in the face of the world’s aggressive and justified indifference.

It’s also about Pat Benatar, the ELCA, Donald Sutherland, ennui, White Hats and the Karens who love them, the guilt that accompanies political inaction, dreadlocks, spray tans, and Parliament cigarettes.

Produced by Jeff Marcovis (thehideawaympls.com/staff) and Jeff Allen
Recorded and Mixed by Jeff Marcovis at The Hideaway in Minneapolis, MN in 2015 and 2016.
Artwork Layout by Scoops. The cover picture is of Matt Johnson in all his be-Cobained glory.
Mastered by Bruce Templeton at Magneto Mastering in 2016. 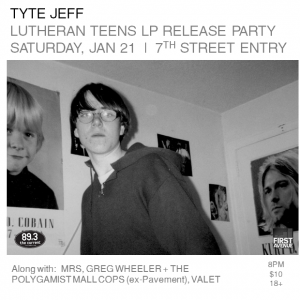 TYTE JEFF “Lutheran Teens” LP Release Show!
Saturday, January 21st at the 7th Street Entry
8PM | 18+ | $10
Sponsored by 89.3 The Current!
Featuring:
MRS
TYTE JEFF
Greg Wheeler and The Polygamist Mall Cops (Ex-Pavement!)
VALET
Advance tickets here: http://first-avenue.com/event/2017/01/tytejeff
White vinyl of the new LP will be available!
Famous bassist Fleamans and his besocked donger will probably hop over to jam with us after his show across the street with his legendary band Da Chilt Peppys thanks

The EP is out today!

It’s been a long time coming, but the TYTE JEFF 6-song debut EP comes out today.

You can listen and/or download it on Spotify, iTunes and all other sundry ways that the modern teens CONSUME CONTENT. Perhaps the easiest way to check out the jams is through this embedded MEDIA PLAYER below that is quite literally making a cloud from my sounds.

Perhaps the TYTEST way to hear the jams is to come out to the Turf Club, this Saturday April 19th in St. Paul, MN for the release show! Also joining us will be the incredible Valet and The Ronnie Buxtons. Doors at 8PM. It will be so much funz. See you there!